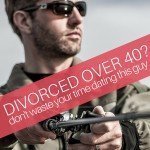 Dating in general is not easy to navigate. But divorced dating in your 50’s can be even more challenging. Especially if you have kids.

Look. I get it. You are used to having a partner, no matter how bad your previous relationship was. It is nice to have an adult around to do stuff with and to share responsibilities. Not to mention sex! lol

But you do have your children to think about. So you must be careful. For your sake and theirs. So sometimes that means you will be a single, 50 and lonely. Try to lean on your posse of friends and embrace the benefits of being newly single to get you through those down times.

And when you are ready to explore the dating world…

Here is some very important dating advice for the over 50 woman you need to hear:

What’s this earth shattering, paradigm shifting information I need to lay upon you?

There I said it. Harsh but completely true. So why do I make this huge ass generalization?

1. If you’ve never had kids, you still think the world revolves around you.

Once you’ve had the pleasure of cleaning the diaper of a small screaming human, or paying $120 to see Dora the Explorer Live on Stage, you realize that you are now way on down the list of importance. To be a parent means to realize that what you want now means nothing at all. You officially don’t mean sh#$.

If you’ve never had kids, you don’t understand that. If you are a single male, you believe that you are number one. Silly, silly person.

2. You are a parent. You can take anything.

Parenting gives you perspective. Spilling your latte doesn’t upset you that much. A full Spin class is a bummer but not a life changer; certainly not the same level of upset as discovering your child’s racked up a cellphone bill of over $358 in one month.

Being a parent teaches you that lots of crappy little stuff happens but as long as everyone gets home in one piece, it’s a good day.

Being a parent, you’re used to the quick change of plans. Anything can happen at anytime and you know that. Someone vomits in their backpack on the way to school and suddenly you are working from home that day.

Date night? Not so much since the sitter canceled.

Over 40 males? Inflexible with a capital “I”.

Had a few dates with a man who was 45, never married, no kids. His entire refrigerator was categorized by shelves with its own Excel spreadsheet. Put the coconut water on the top shelf by mistake and thought he was going to collapse in his granite perfection of a kitchen in a full on seizure. Can you say over 40 Freak Show?

4. Being married before means you are brave enough to make a commitment.

Yes, we’ve been married and our marriages failed but at least we had the courage to say I Do.

Maybe we failed miserably but we took the walk down the aisle, threw the wedding bouquet and put ourselves in debt to have a kick ass party. At least we tried. Men who’ve made it to 40 and can’t commit? Let them go.

Don’t believe that they are single because they put their professions first or that they just haven’t found “the right one” yet. They are single for real reasons. Fear of commitment. Being emotionally unavailable. Or just because they are big fat selfish douche bags. They literally have no idea what women want in a relationship, only what they want.

I dated one man who whined about how women didn’t understand him, that everyone he cared for left him. Yes, yes, they did. All the women with any intelligence and self worth did leave when they figured out he was a narcissistic ass wipe with the emotional maturity of a five year old. I already have one of those. Thanks but no thanks.

Leave these men to embarrass themselves and date cocktail waitresses who are 22. Women so young and naive that they can’t discern their emotional disabilities.

Here’s my advice.  Want a real shot at happiness? Find yourself a man who’s been married before. Find a man who’s had kids. Someone who knows what its like to drive carpool. To hold his wife’s hand in the hospital. Someone who’s got battle scars and loss. Find a real man, not a self involved 40 something year old man child.

Is this post harsh? Probably. I just have to save my ladies some time and tell the unvarnished truth. Men who are over 40 and never married are worth their weight in trouble. Walk away.

Have you dated a man who’s over 40, never married and no kids? How did it turn out?

Rosemond is a lifestyle blogger at Round And Round Rosie.

I agree with Denise! My husband was a life-long bachelor at the age of 49 when I met him. I thought he was going to be my "rebound romance" and figured he wasn't going to be interested in committing. Totally wrong! He'd been through some relationships where he was ready to commit and she wasn't. We've been together for 12 years now, married for almost 5. He's the BEST!

Bull. There are some men over 40 who want to commit but haven't found the right person for lots of reasons. While my husband wasn't 40 when we married, he was 37 and single and never in a serious relationship. Why? He's extremely shy and introverted. We found each other and he's amazing. Maybe we need to stop classifying and instead get to know each person with an open mind. Commitment phobes make themselves known early on.

Ah not sure whether this worked for me. I got married for the first time at 41 and my husband was 51 and neither of us had kids. He's the sweetest most caring guy and we're married almost 10 years now. It was the younger guys who couldn't commit and were always self-absorbed.

Corinne, congrats on finding a good one!

Yep. Dated him, and dated, and dated. Never got anywhere. Unless I broke up with him. Everytime I broke up with him he ran after me. The rest of the time, he could barely work me into his schedule. Huge, painful waste of a year and a half of precious life. Final breakup (over my current wonderful 2nd husband of almost 20 years) -- he showed up with a diamond ring.

These guys love it when you are unavailable, it only makes them pursue you harder!