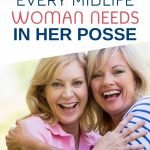 Remember at school when you had a Best Friend (or BFF as they say nowadays). Mine was Karen Berry.  We must have made an odd-looking pair – she was small for her age and looked like Snow White and all the boys liked her and wanted to carry her school bag. I was unfeasibly tall for a 10-year old, with a HUGE amount of bright red hair and freckles and didn’t look like any fairytale heroines. And I liked to hit boys with my school bag, as a sign of affection.

Karen and I would giggle and whisper as we discussed the merits of marrying David Cassidy vis a vis Donny Osmond (I still think Donny was a better bet) and if anyone tried to muscle in on our friendship we’d close ranks.

As I’ve…ermmm, matured I’ve realized it’s unrealistic to expect one pal to fulfill all your friendship needs and discovered how great it is to have a mixed bunch of friends who each bring something different to the party.

10 Friends Every Midlife Woman Needs In Her Posse

So here’s The Dream Team of Midlife Friends…

The Good Time Gal – the one you can tell ANYTHING to and no matter what the problem is, she’ll suggest Tequila as the solution. Never knowingly underdressed, she loves a bit of diamanté and spending time with her always makes you feel better. But sometimes you just want to quietly lick your wounds and then it’s time to pop round to see…

The Mum – the one you can tell ANYTHING to and she’ll pat you on the arm, make you up a bed on the couch, then bring you a tray with homemade soup & bread and a pot of tea & chocolate on it, and watch an old movie with you in silence. But sometimes you really want some advice, and it’s time to hook up with…

The Wise One – the one you can tell ANYTHING to and she will give you the benefit of her wisdom. Often it’s great advice. And often you take it. But sometimes you don’t want advice you just want to share a problem and that’s when it’s time to spill your guts to…

The One That Your Secret Is Safe With – the one you can tell ANYTHING to and she won’t ever bring it up again and will never ever share it with anyone, not even if she was being waterboarded. But the downside is she never gossips, which can be a bit boring…so then it’s time to catch up with…

The Gossip – the one you CAN’T tell ANYTHING to because she will immediately share it in a WhatsApp Group and hint about it on Facebook. But she’s great to shoot the breeze with and discuss who is doing what, with whom, and why they shouldn’t be.

The Coach – the one who pushes you to do things – go to the gym, cook a soufflé, learn Spanish, She emails you articles that might help and affirmations like A Mountain Is There To Be Climbed and hugs you as she tells you that you’re capable of ANYTHING and sends you an appropriate greeting card when you do SOMETHING.

The cool one who is fun to go shopping with. She reads Vogue and knows what Statement Sleeves are and will steer you away from that leopard print top and nudge you towards the Muted Mocha  (THE colour of the season) one. She’ll give you a voucher for a makeup lesson as a birthday gift and suggest lunch in the latest bistro in town.

The one who shares your passion. NO!!… we are not talking threesomes!! This is the one will happily talk to you for hours about the thing you both love doing – whether it’s yoga, or mountain climbing or daytime drinking. At the moment I’m a blogging bore but fortunately I’ve got two new blogging pals –  Naomi is in her mid 20s and Joyce is 83 and when we meet we can happily rattle on for hours about SEO and Widgets and Plugins and How to use Yoast (don’t ask me, I haven’t a clue) – which saves me boring the pants off everyone else.

And finally, there’s The Event Organizer.   She can be a bit of a pain in the ass – always organizing stuff and bossing you about and frowning if you’re late, and she always seems to be in the charge of the Kitty Purse and…oh!! I think that might be me.

So there you have it…The Dream Team of Midlife Friends.  You might be lucky and have one friend (or partner) who fulfils a few of those roles but it would take one helluva gal (or guy) to fill them all.

What type of friend are you?

Meet Jill! By day she’s an upstanding PR & Comms Professional – living and working in Scotland. After dark (evil laugh)….she turns into a cynical blogger taking a wry look at (mid)life. As far as she’s concerned if you had sass & attitude at 22 you’ll have even more of it in midlife. Jill loves writing and has a mildly cynical outlook on life, so she’s forever sharing unsolicited opinions from Looking & Feeling Great, to those things we all love…Travel & Adventure, Eating & Drinking, Movies &, Books. Visit her at Midlife Smarts.