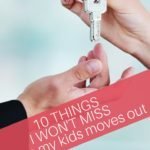 Ok. I don’t want to jinx it but I helped my oldest son look for an apartment yesterday.

Is it un-motherly of me to be so excited?…For him I mean.

Oh, who am I kidding. I am absolutely giddy at the prospect. I am even willing to throw money at this to make it happen. And if you are about to write me a comment about how much I am going to miss him when my kid moves out, stop right there. Ain’t gonna happen. Firstly, the apartment is a stone’s throw away. Second, I love him but I can’t live with him any more.

I have never claimed to be the neatest person on the planet but honestly, this kid takes the cake…and leaves the plate in his room. And I think he is a hoarder. At least in my house he is. He brings home all sorts of stuff and leaves it right inside the front door. That will probably change when he gets his own place. Especially when I start bringing all his crap over there.

These are just a few of the things that I am looking forward to:

1. Coming home and finding the kitchen just like I left it, clean.
2. Not having to go to his room when I need a plate or glass because there are none left in the cupboards.
3. My programs on the dvr recording as intended and not cancelled to record some other stupid show instead.
4. Tools and other rarely used items in their proper place, not where ever they were used last.
5. Not having to hide food for recipes I want to make so they don’t get eaten before I get to it.
6. Being confined to my room on a Friday night because friends are over, not mine of course.
7. Finding shit broken when I go to use it and no one told me about it.
8. Having left over pizza for MY lunch, the next day.
9. Not having to park on the street during a rain storm because someone else has parked in my one car driveway.
10. Hot. Water.

Related Post: How to get your adult children to move out.

Are you an empty-nester? Tell me, does the air smell fresher?

We downsized so that once they had left home, the boys couldn't come back. Maybe that's your next move!

A lot of my friends have done that! No forwarding address either? lol

I can relate to almost all of these! Of course mine is only 16, so I've got a few more years before I get my house back. Good luck with the apartment.

Thanks Suzanne. He has officially left the building!

Eek! The no hot water thing would be my big Hell NO, you gotta go! Good luck and I hope that the apartment goes through. Fingers crossed.

It did! But things keep disappearing from my house, like the toaster oven...