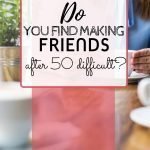 As you make your way through schooling and jobs, you are constantly meeting new people. Lots of people. And thus it is easy to find a few that you really connect with and become fast friends.

But life has a way of getting busy and even with the best intentions, relationships slip away as time goes on. And as we wind down our work lives and retire, our world can get smaller and smaller as the opportunity to meet new people contracts. It makes making new friends after 50 extremely difficult without a conscious effort on our part.

Making friends when you are young is easy

Born under the sign of Sagittarius, I was naturally a friendly child and making friends was easy for me at school, work and social groups.

In the third grade, my best friend and I would trade lunches every day because we liked what the other brought better than what our mothers packed for us. We joined Brownies and Girl Scouts, went to lots of birthday and slumber parties and to the Saturday morning movies.

When I was nine, my grandmother wrote in my autograph book, “Be a friend and you will have many.” At the time I thought it was corny, but throughout the years, I have tried to follow her advice.

I had my first close friend in the sixth grade. We mostly gossiped on the phone and had slumber parties. It was during this time that I learned my first lesson about trusting friends when she took my “steady” boyfriend away from me. It was no great loss, because although he gave me his ring, we didn’t even talk on the telephone.

In high school, I had three close friends who were all very different from each other. One was my “boy crazy” friend who I could talk with for hours about who we were dating and who we wanted to date. The second friend and I had great fun going to all kinds of events throughout South Florida and the third friend had wonderful beach, birthday and slumber parties at her parents’ oceanfront mansion.

After graduating from high school in Florida, I moved to New York City and made some lifelong friends. Though not a lifelong friend, the most famous friend I had was Jaclyn Smith. She was known then as “Ellen.” We lived on the same floor at The Barbizon Hotel for Women. Not yet an actress, she was taking dancing lessons and trying to get modelling jobs. I often visited her in her room and we would talk about what was going on in our lives.

Over the years, I worked for several large corporations, including Owens-Illinois, IBM and Wendy’s, and made many friends there. When I left those companies, I kept in touch with some of them and we still meet for lunch and/or “talk” on Facebook.

Three of my favourite friends live three hours from me. I have known one of them since we were nine years old when she lived two houses away from me. We were all friends in the 1970’s and got together often with our spouses. We saw each other last year and had a great time. Strangely, when you get together with friends you haven’t seen in years, it is as though no time has passed.

The closest friend I ever had hurt me deeply and the reason still baffles me. She and I had been friends for over twenty years – with never a disagreement — and she was my matron of honour when I got married. Then unexpectedly she married a man she said she wouldn’t marry without my blessing, but never even introduced him to me. It’s been over twenty years and, even though I’ve reached out to her twice, we haven’t spoken since.

My husband and I were in a serious car accident four years ago. Among several permanent injuries, I had five broken ribs and a broken sternum. While recuperating at home the first year, I was surprised that no one (except a couple family members) called or visited us. It took me a year to realize it, but when I did, it felt like a slap in the face. One friend called later and told me she hadn’t called earlier because she didn’t know what to say. To quote Dr. Wayne Dyer, “How people treat you is their karma, how you react is yours.”

After working for four decades and being around people a majority of the time, I now enjoy spending most of my time at home with my husband and two Siamese kitties. I am finally living my dream — doing what I want to do when I want to do it.

I haven’t given up finding new friends

Since retirement, I have tried to make new friends by joining writing groups, a health club, Weight Watchers, a women’s lunch group and took writing classes, but made just one new friend. Maybe I’m more particular now when it comes to making friends – I like to be around people who have colourful personalities, great senses of humour and are on a spiritual path – I don’t think that’s too much to ask.

In the meantime, I will treasure the friends I have and continue doing the things that interest me and bring joy to my life. According to Rod McKuen, “Strangers are just friends waiting to happen.” My new best friend could be right around the corner!

Melodee Currier lives in Dublin, Ohio with her husband. She left corporate America in 2008 where she was an intellectual property paralegal. Since then she has devoted her time to writing and has had three eBooks and numerous articles published on a wide variety of topics. Her articles can be read on her website melodeecurrier.com.

Good Morning ... I so much loved reading this articles about friends... as I lost mine of 45 years to Cancer.. and I miss her every day...we were going to grow old together...? now I say hello to her each and every day..