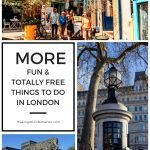 London is an incredible and vibrant city that attracts millions of visitors every year. Unfortunately, especially during a global pandemic, travel and tourism plans are things that many of us have temporarily shelved for fear of being in enclosed spaces with others, particularly with the potential inability to socially distance.

Thankfully, there are lots of places in London where, with careful planning and booking in advance, it is still possible to travel and see interesting things while still socially distancing.

Here are some of our favourites:

Of course a cemetery would be first on my list! I absolutely love ghost tours. You can check out my other ghostly adventures in Paris, Cape Cod and Niagara Falls.

Located in North London, Highgate Cemetery is designated Grade I on the Register of Historic Parks and Gardens is one of the Magnificent Seven cemeteries in London. It is the resting place of hundreds of notable people, including Karl Marx, George Michael, author Douglas Adams, Bob Hoskins and Michael Faraday, as well as 318 Commonwealth service personnel from WWI and WWII.

With lots of gothic tombs and trees, shrubbery and wildflowers, the cemetery is a stunning way to spend a socially distanced day.

Note: The West Cemetery is accessible by timed ticketed guided tours only for a small fee on Saturday and Sunday afternoons which must be booked in advance onine. However, the cost of the guided tour includes access to the East Cemetery and a map.

Hyde Park is one of London’s eight Royal Parks and covers an area of 350 acres.

You can easily spend the whole day here.

Peter Pan is a 1912 bronze sculpture of J. M. Barrie’s character Peter Pan that was commissioned by Barrie himself and made by Sir George Frampton. It stands about 14 feet (4.3 m) high and features a young boy standing on top of a tree stump, which is decorated with figures of fairies and of British wildlife including rabbits, squirrels and mice.

Neal’s Yard is an Instagrammers dream, full of brightly coloured buildings that is just a short walk from the Covent Garden tube station. There are plenty of places to eat, but don’t forget to look out for the Blue Plaque that marks the offices that Monty Python members Michael Palin and Terry Gilliam bought in 1976 to use as studios and editing suites for Python films and other projects.

Take a stroll down South Bank

The South Bank stretches between Westminster Bridge and Blackfriars Bridge on the south side of the river Thames. With the London Eye, The Queen’s Walk promenade and plenty of historic and modern architecture, this is a brilliant place to take a stroll on a beautiful day.

Postman’s Park is a small green and a public garden, just a short walk north of St Paul’s Cathedral in central London.

In 1900, the park became known for the Memorial to Heroic Self-Sacrifice by George Frederic Watts, dedicated to the ordinary people who have died while saving the lives of others and who otherwise might be forgotten.

Beginning with just 4 of its planned 120 tablets, the memorial has been added to over time and was upgraded to a Grade II* listed in 2018. In November 2013 a free mobile app called The Everyday Heroes of Postman’s Park was launched which documents the lives and deaths of those featured on the memorial in more detail. This is an unusual place to see in the centre of the city, and totally free!

Remnants of the Roman London Wall

Built in around AD 200, the London Wall is the remnants of a Roman wall which was once part of the eastern defences of Roman Londinium.

The shape of London was defined by the wall, remaining unchanged for about 1700 years, and stretch for around two miles from from Tower Hill in the East to Blackfriars Station in the West. There are multiple sites where the original wall and its bastions still exists, including Tower Hill, Cooper’s Row, Vine Street and Aldgate.

Here is a great guide to some of the surviving fragments of the original wall.

Blink and you’ll miss it – London’s smallest Police Station can be found hollowed out in a plinth in Trafalgar Square.

While sources differ, a temporary observation area had been set up to allow a Police presence to monitor the goings on within Trafalgar Square, which had been an area of protest during the Bloody Sunday Riots of November 1887 and the General Strike of 1926.

In 1927 Sir Lionel Edwards (Head of the Office of Works) suggested the idea of hollowing out the base of one of the square’s lamppost plinths for a single policeman, and London’s smallest Police Station was created in the south-east corner.

Unfortunately, it is no longer in use as a Police Station – it is now used as a broom cupboard by the Westminster Council cleaners – but it is definitely worth a look!

This list should give you some ideas when planning a safe and socially distanced visit to one of the most beautiful cities in the world. Don’t forget your mask, gloves and plenty of hand sanitizer, and enjoy some of the more unusual things that London has to offer… absolutely free!