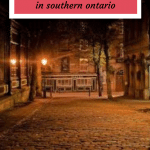 From the Courthouse to the Apothecary to the Royal George Theatre, it is easy to think you have been transported back in time when visiting the charming town of Niagara on the Lake, Ontario, Canada. But don’t get too comfortable. NOTL claims to be the most haunted town in Canada. With 80% of the homes here boasting to have at least 2 resident ghosts, this seems to be the best place to experience the spookiest night of the year, Halloween.

If you don’t mind sharing your room with guests that have never left, you can stay in one of the many hotels, inns or B&B’s that claim to be haunted. Who needs to sleep anyway? Oh, and pack extra underwear.

HAUNTED PLACES TO STAY IN NIAGARA ON THE LAKE

The Olde Angel Inn is a historic pub established in 1789 and rebuilt in 1815 after American forces burned the town of Niagara-on-the-Lake to the ground during the War of 1812.

Legend has it that Captain Swayze (no relation to Patrick ladies, yes I asked), a Canadian militia officer was killed in the basement of the previous Inn and still resides here to this day. I have actually had a run in with the Captain myself in the ladies bathroom which is located in the basement. I had an overwhelming feeling of a presence and of being watched. When I returned to the dining room, I mentioned it to my waitress and it was only then that I had learned the story of the ghost. Apparently, Captain Swayze does like women and quite often can be found in the ladies bathroom.

Guests of the inn also report hearing noises in the ‘Colonel’s Suite’ and in the empty dining room. Legend has it the ghost will remain harmless while the British flag flies over the inn so you may want to verify that before you check in.

The Prince of Wales Hotel was established in 1864 was renamed in 1901 in honour of a visit by the Duke and Duchess of York.

The legend of the ghost of room #207 is that during the War of 1812, an American soldier was ordered to search a house that was located on what is now the hotel grounds. He opened the bedroom door on the second floor of the house and saw a figure standing near the window. Thinking it was a British soldier, he raised his bayonet and ran toward the figure. It turns out, he had accidentally killed an innocent woman named Molly McGuire, who stood near the window every night awaiting the return of her husband. Apparently, Molly still waits.

I have a room booked in the Prince of Wales Hotel for Halloween night this year. No, I did not ask for Molly’s room. I am not that brave. I will let you know my experiences after.

During the 1812 war it is said that the British hero General Issac Brock fell in love with Lady Sophia Shaw but Sophia’s parents refused to allow their marriage. Their affair continued in secret and General Brock swore he would return to marry her. Tragically, the general was killed in battle.

Sophia never recovered and never married. She is commonly spotted wandering the halls of the manor house crying in despair, giving her the name “Sobbing Sophia.”

Today the manor is a lovely B&B and you can reserve the Lady Sophia’s room if you dare.

GHOST TOURS OF NIAGARA ON THE LAKE

Fort George served as the headquarters for the British Army and was the site of many battles of the War of 1812. Along with sightings of soldiers, a little girl (who is thought to be a soldier’s daughter), strange noises and knocking sounds have been heard in empty buildings, and many people have seen a woman with long hair dressed in clothing from the 1800’s in the Officer’s Quarters.

Established in 1994, this ghost tour is the longest-running ghost walk in the Niagara Region! Candlelight ghost tours of Fort George are offered throughout the spring and summer, from May to September. Special, multiple Halloween ghost tours are offered but tickets are going fast. I have been on this tour before but this will be my first Halloween tour. I will be in the fort during the witching hour of midnight!

Niagara on the Lake Ghost Walks

This 90 minute walking tour covers many of the haunted buildings in the core of Niagara on the Lake. The guides are all very knowledgeable and enthusiastic story tellers. Landmarks such as Niagara on the Lake’s Courthouse, Prince of Wales Hotel, Apothecary, Royal George Theatre, Smithy and the oldest legend in North America are discussed. Plus the town’s most famous ghost at the Olde Angel Inn, and the house that makes cameras go crazy.

One thing about NOTL’s real residents is that they are all willing and eager to tell you their own ghost stories. Don’t be afraid to ask your waitress or cab driver if they have had any personal experiences.

FIND A HAUNTED EXPERIENCE NEAR YOU