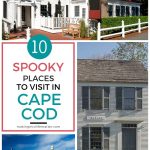 In case you didn’t know, there are some truly spooky places in Cape Cod, Massachusetts. Read on to learn about some of the places where spirits still wander in this beautiful place by the sea!

Cape Cod, Massachusetts is one of the most popular vacation spots in the country, and with good reason. After all, it’s stunningly beautiful. You have the sea and the sun and lots of green, plus delicious seafood to eat from sunup to sundown.

So if you’re brave and ready to do some communing with the other side, here are some of the coolest spooky places in Cape Cod. Get ready to shiver!

Another truly spooky place in Barnstable is the Old Gaol (Jail). It is the oldest wooden jail in the US and was built in 1690 to serve the colonies.

The jailhouse is now located at the Coast Guard Heritage Museum, which seems like a strange place to find a haunted building. But people report that even walking around outside this ancient building gives one a “creepy vibe”, and when inside, people have reported encounters with more than one entity.

Of course, jails are spooky places even when they are modern and well-lit. You would think that the restless spirits at the Old Barnstable Jail would probably prefer to be somewhere else. The question is – what are they willing to do to find their way free?

The Barnstable House is very likely the most haunted house in Cape Cod – and one of the most haunted in the entire USA. Known as the “house of 11 Ghosts”, visitors to this stunning mansion report cold spots, voices, and other chilling phenomena. Built in 1713 in Scituate, MA, the Barnstable House was moved by barge in 1716 by owner James Paine and placed in its current location.

No one is certain why so many spirits have gathered in one home, but some of the spirits are believed to be former owners who truly loved the house and simply didn’t want to leave. Of course, it could also be that the house is built over an underground river, as water is often considered to be a conductor of metaphysical energy.

No matter what the reason, the activity in the Barnstable House is well-known and well documented. Be sure to check out their website for more information, and if you’re feeling brave, you can make reservations for a private tour!

Many of the spooky places in Cape Cod hide beneath the surface. The Orleans Waterfront Inn is a prime example of this. The cheerful hotel sitting beside the water appears to be the epitome of tranquility. It’s the sort of place where you go to “get away from it all”, eat breakfast in bed, and enjoy the view of the water on the private deck of your comfortable, beautiful room.

But there is another side to this romantic beachfront hotel – and it can give you chills in the dark of the night. Guests report slamming doors, a woman dances in an unoccupied room, and footsteps can be heard walking down empty hallways.

Built in 1875, the hotel has had a colorful history. It has been the private home of a sea captain, a boarding house, and even a brothel. And the current owner claims that three ghosts, including one he calls Hannah, have made the hotel their eternal home.

There are certainly worse places to spend eternity!

The Dillingham house is a lovely brick-fronted four-bedroom house with great historical value. Originally built in the 1650s, it was home to the Dillingham family for many years, through many tragedies, until 1926. Abandoned for a number of years after that, the lonely house was apparently never quite alone. People began to report sounds, strange lights in the night, and other odd happenings on the property.

Thankfully, in recent years the house was purchased, renovated, and for a time became a lovely bed and breakfast. But reports of haunting activities continued – strange odors, sounds, and mysterious cold places throughout the building.

At the time of this writing, the house is closed to the public and up for sale. So, if you have always dreamed of living in a home where you are never quite alone, this Cape Cod beauty may be the house of your dreams!

The Old Yarmouth Inn and Tavern

If you love good food, the Old Yarmouth Inn is one delicious location to check out in Cape Cod. They offer amazing seafood dishes and other fine cuisine and just one look through their menu will have your mouth watering as you dream about a road trip to the eastern seaboard. And if you have a special event to plan, the Inn would love to accommodate you.

However, you may find that not every helpful member of the staff is “of this world.” In fact, guests who act rudely might just find themselves face to face with management from the beyond.

It is believed that the Inn is home to three or more spirits. Considering that this is the oldest inn in the country, with a rich and varied history (including once being an important part of the underground railroad), it is no wonder there are spirits here who never wish to leave. So when you visit the Old Yarmouth Inn, just be sure to mind your manners!

Highfield Hall is one of the most inviting spooky places in Cape Cod. The historic estate is a cultural center where the public is welcome to come and “wander”. They host a variety of classes and special events throughout the year. Whether you want to learn more about food or simply hear some great music, you’ll find something to enjoy at Highland Hall. And if you just want to enjoy the great outdoors, there is a beautiful garden and 400 acres of conservation land surrounding the beautiful mansion.

But guests have reported a woman who sits in her window looking out at the garden – from an empty room. And the clicking of heels is often heard walking down empty hallways. It is believed that some members of the Beebe family, the original owners of the mansion, have never quite left. And with a home this beautiful, who can blame them?

If you are seeking a romantic getaway on Cape Cod with your beloved, the Simmons Homestead Inn in Hyannis Port is your dream destination – especially if you like your romance mixed with a side of spooky.

This relaxing B&B was once the home of a sea captain. It’s appointed with all the modern amenities to ensure you will be as comfortable as possible. And for cat (and dog) lovers, this place is paradise – as this pet-friendly Inn is home to many cats.

It is also home to a number of spirits, according to the locals. While enjoying your stay, you just might run into one of them, including a little girl named Sarah, who is said to have drowned in the lake in 1833. She likes to come by and say hi now and then. And is it any surprise? Even ghost kids love animals!

The story of the Burgess House is rather poignant and special. The house was originally the home of Captain William Burgess and his wife Hanna Rebecca. Sadly, the Captain died at sea on the clipper ship Challenger, leaving his heartbroken widow behind. She loved her husband so much that although she lived another 63 years, she never married again.

And even after death, it seems as if she has never left her beloved house. There have been many reports of artwork and other objects moving from place to place.

At times over the years, the Burgess House has been open to tours. Currently, however, it is a private residence and not open to the public. But if you happen to be in the area, there’s nothing to stop you from driving by. You might even see a little old lady through a window of the house, rearranging artwork.

Take a Ghost Tour in Provincetown

If you’re spending some time in Provincetown and want to commune with the spirits, get in touch with the people at Provincetown Ghost Tours. They love to take you around to the most exciting areas of paranormal activity, and you might just learn a bit of the town’s history along the way!

If you’ve met all the ghosts in the immediate Cape Cod area, head just a little bit North to Plymouth and make a reservation for a ghost tour. There are several to choose from, depending on what you’d like to see. But there really are no bad choices. And if you have the time, why not take them all? Otherwise, you might just miss something!

Cape Cod, Massachusettes might be the ultimate vacation spot. But now you know it is also a great place for ghost hunters to visit, too. Seeing a spirit or two will simply make your vacation even better, right?

And when you’re done getting to know the spirits on the east coast of the US, how about checking out these other chilling haunted places in Paris or Southern Ontario?