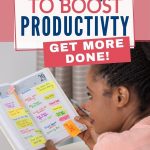 We all want to make the most of our time, particularly when we are organizing homes, jobs, children, grandchildren and trying to find some much needed time for ourselves. Being busy is often used as a buzzword, but there’s often a difference between being busy and being productive.

Productivity is all about working smarter and not necessarily harder – organizing ourselves and our task list in a way that works for us and reduces levels of stress. After all, why spend two hours on something when it could be done in one?

By working smarter and more economically you can save lots of time, ultimately freeing up more time for yourself to do the things that you enjoy.

Here are some easy ways in which you can boost productivity:

It’s easy to procrastinate and avoid tackling the bigger tasks that you don’t want to do and have been putting off for a while. Prioritize your tasks by highlighting what is urgent, what will take the most amount of time and what can be left until later in the day, write it in a comprehensive list and work down each task one by one.

Some of us are early birds and are at our most energetic within a few hours of waking up. Others are night owls, preferring to get things done later in the day. When prioritizing your task list, think about when you are at your most productive to tackle the more challenging and time consuming tasks.

2. Limit the time you spend on tasks

We’ve all worked on something where we’ve completely lost track of time. With only a small percentage of people able to accurately gauge the passage of time, why not make a point of keeping note of how long you’ve spent on a particular task in order to prevent yourself from sinking too many hours into it? Set a realistic timer and do your best to stick to it.

If a task doesn’t need to be done that day, set a deadline for completion. Make sure that these deadlines are realistic, you don’t want to be disappointed when you haven’t finished that whole spreadsheet in the five minutes you gave yourself!

When you’ve got a long list of jobs to do, it can be tempting to try to cross some of them off at the same time. However, studies have shown that multitasking isn’t actually possible for the human brain, and we can only concentrate on one thing at a time. Multitasking is simply switching between one thing and another, preventing yourself from properly focusing on either task and potentially slowing yourself down.

It can sometimes be difficult to know how to attack certain projects, especially the ones that will require lots of effort and time. A great way to avoid overwhelm is to break the larger tasks down into smaller chunks and tackle each of them one at a time. This helps to make the work feel more manageable and boosts your sense of accomplishment with each of the tasks that you complete.

I like to make a point of crossing things off my list as soon as they are completed, which motivates me to carry on.

Though it may seem counter-productive, breaks can be extremely beneficial for improving focus and concentration. They are thought to help you to maintain a more consistent level of performance so you’re much more likely to get more work done than if you insist on powering through.

At certain points in the day take a few minutes for yourself to reset and de-stress – go for a walk outside, do some deep breathing or meditation and don’t forget drink lots of water to help you stay hydrated.

To avoid the endless distractions our phones provide, turn off your notifications by switching to Do Not Disturb or Airplane mode, or even turn your phone off and leave it in another room. Resist the urge to check your texts and emails if you are in the middle of a task unless it is important.

Remember that the point of being productive is to work smarter, and by using these tips and tricks you’ll be amazed at how much more productive your day can be!