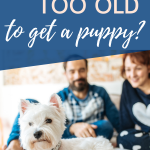 Are you considering getting a puppy for your midlife relationship? If your children have flown the nest, it could be just the thing to give you some focus …couldn’t it? Or is there more to it?

Getting a puppy when you’re well into your fifties, seemed a very exciting thing to do. And it definitely was, but it wasn’t without its challenges, too.

Here are some pros and cons of getting a puppy at midlife.

Getting a puppy has been life-changing, but I resisted all the way, at first. Coming from a point of no experience with dogs, I felt my concerns were justified.

My partner, however, felt differently. He’d grown up with dogs and had always owned one. Now, as we were no longer in the running for children, he wanted us to have our own puppy.

He began his campaign twelve months in advance. It started with hints, then video clips of cute dogs on YouTube. We also had dog-sitting sessions for friends and family.

Unbeknownst to me, during this time, he was also investigating the type of puppy to have. In the past, he’d had a dachshund, a golden retriever and a Samoyed.

Now he wanted a different type of breed and researched all types of dogs. Eventually, he decided on a Cockerpoo.

These so-called designer dogs are bred from a Cocker Spaniel and a Poodle. Since they’re not strictly pedigree, they are quite a hardy breed.

They love water, like playing fetch and have excellent temperaments. They don’t shed hair, but we found they have a tendency to tangles and matting.

THE PERFECT TIME TO GET A PUPPY

At the time I worked at our local college, so had all the same holidays as the students. It meant I was off for seven weeks over the summer. My partner had figured this would be the perfect time to bring a new puppy into the house.

I’d come round to the idea to the extent that, one weekend we went to see a Cockerpoo puppy. Little did I know, my partner had a hundred notes tucked into his back pocket for the deposit.

When we got there this tiny, warm, soft, quivering puppy was placed in my hands. He actually fitted into one hand, he was so small. I stroked his head very gently with one finger. He licked my thumb. Need I say more.

The money was paid and three weeks later we were back to pick up the slightly bigger puppy. He was sick on the way home, between the narrow gap of the car seats. It was my partner’s car, so I may have been smiling inwardly, just a little bit.

We’d chosen the name Scampi for our new puppy and the breeders had been calling him by that name so he could get used to it. Once we were back, we let him explore the garden of what was now his ‘forever’ home.

THREE YEARS ON I COULDN’T IMAGINE NOT HAVING A DOG

Fast forward three years and I’ll be the first to admit, I love that little dog! Anyone who has any experience of Cockerpoos as a breed, will know they are the craziest, quirkiest, funniest little characters you’ll ever find in a dog. And clever, too.

I couldn’t imagine not having him now. For someone who was not terribly keen on the idea to start with, I’ve definitely changed my tune.

Related Post: Are You Too Old To Start Over?

But, it wasn’t all sweetness and light. Puppies are really hard work. I’d brought up twins and this seemed equally, if not more exhausting.

It was all the little puddles and piles of doggy-do I found hard to cope with. We had puppy pads spread out everywhere, but most of the time he did the business half on and half off the pad.

At one stage, my partner nicknamed him Mr Whippy!

During the daytime, I set up my laptop at the kitchen table and tried to write while Scampi dug up the garden. My patience was severely tested as he took not a blind bit of notice at my attempts to get him to stop.

I’d go into the garden to try and bring him back inside and end up chasing him round the garden, like a crazy woman. He thought it was great fun and could outrun me every time.

Hanging out washing was another chance for playtime in his mind. He would leap up and grab the laundry in his mouth, as I tried to hang it onto the line.

As he tugged the item, the clothespin would ping off and the freshly laundered clothes would fall to the ground. Then he’d make off with the clothespin. I’d find it days later, all chewed up and useless.

I DIDN’T KNOW WHAT I WAS DOING

More than once, I recall thinking, I’m doing it all wrong and I don’t know what I’m doing.

We had more than one conversation in the early hours one night, where I said I couldn’t take any more.

We decided to take him to puppy training classes and that definitely helped. He loves socializing with other dogs and it was comforting to see we were all in the same boat when it came to mischievous behavior.

Looking back, those first six months were such hard work. It takes some energy and an awful lot of patience, as well.

IT’S WORTH THE HARD WORK, BUT THINK CAREFULLY BEFORE YOU COMMIT

The puppy stage doesn’t last all that long, it just seems it at the time. I’m so glad to have him now, and can truthfully say it was all worth it.

I would, however, advise anyone to please think carefully before you commit. You really do have to be ready to devote the first few months to your new puppy.

As well as having the time, I also think it helps if one of you has had dogs before and knows what they’re doing. Getting a puppy is a lot different to bringing an older dog into your home.

DO YOUR HOMEWORK BEFOREHAND

Do your homework beforehand and find out as much as you can about puppies, dogs in general and the type of breed you’re thinking of.

Cockerpoos come in all sizes, depending on the size of the dogs used for the breeding. My partner had checked this too, and we saw both parents on the first visit.

I know people who’ve bought a Cockerpoo without checking its parents and ended up with a giant waist high dog.

It goes without saying, to make sure you’re dealing with reputable breeders. Ours had a young family and the children were encouraged to interact with the puppies so they could get used to a proper home environment.

WHERE TO FIND MORE INFORMATION

A great place to start is the American Kennel Club as they have lots of good information including a section on expert advice. They don’t cover mixed breed dogs as they’re not recognized as pedigree.

The Humane Society of the United States shares some excellent advice on getting a puppy with tips on where to go and what to avoid.

If you live in the UK check out The Kennel Club UK or The Dogs Trust for helpful advice and information.

Sandra Shannon is a UK based Copywriter and Content Writer. She is also a Baby Boomer who specializes in writing about 50+ issues, taking inspiration from her own first-hand experiences. She is young at heart and feels that age is just a number. Her hobbies include cooking, walking the dog, yoga and the odd workout… but not too strenuously! You can reach out to Sandra here.