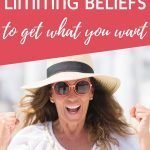 Why is it that some people seem to drift through life and get everything they want while you find it difficult to manifest even the smallest things you desire? Sometimes it is really hard to not be jealous, be happy in the moment and just focus on yourself and the things you want to change. The good news is, mastering your mindset is easier than you think! Let’s take a look at what limiting beliefs are, where they come from, and how you can overcome them for good!

What are limiting beliefs?

As we go through life, we naturally develop beliefs based on our experiences and observations of the world around us. Starting in childhood, we absorb the things that others tell us, the messages we receive from the media, society, and our social circle. We also develop beliefs based on personal experience. If you received praise as a child for an activity you enjoyed (dancing, for example), your brain may have translated this into the belief that you are a naturally gifted dancer. If you forgot your steps the first time on stage or someone criticized your technique, you may have instead developed the belief that you are no good at dancing.

We tend to become very attached to our beliefs, often continuing to hold onto them even when there is evidence to the contrary. It’s important to always remember that simply believing something does not make it a fact!

“A belief is just a thought you keep thinking.”

Beliefs are nothing more than assumptions and opinions we’ve formed about our current reality! Our brains love the familiar and will gravitate toward well-worn thought patterns whenever possible. Any time you reinforce a belief, it gets stronger.

As the name suggests, limiting beliefs are the ones that hold us back. They are the beliefs that for some reason, we can’t be, do, or have something we desire. At some point or another, we’ve all experienced a limiting belief rearing its ugly head.

How to find your limiting beliefs

Is there anything you have been trying to manifest and it just won’t come? Is there something you desire that has a “yes, but…” pop up every time you think of it? Do you worry a lot? Are you a perfectionist? Do you tend to make excuses for why things in your life are as they are? Are there any areas in your life where you tend to think in black and white (believing that something is “always” or “never” true)?

If you can say yes to any of those questions, there’s a good chance you have at least one limiting belief attached to the subject at hand. The next step is to drill down a little deeper to disprove the belief and replace it with one that doesn’t limit you!

10 Limiting beliefs quotes to motivate you

How do you overcome limiting beliefs?

1. First of all, it’s okay to acknowledge that the limiting belief exists and that it’s blocking your desires from manifesting. What you resist persists, so don’t resist your own resistance! Make peace with the fact that right now, you do still have a belief that’s not serving you.

It can be helpful to tell your brain (as though it were a separate entity) “Hey, I know you’re trying to protect me from something that could hurt or embarrass me, and I thank you. But I’ve got this, and it’s going to be okay!”

2. Then start asking questions, like a scientist. “Is this belief absolutely true?” “What evidence do I have that this is true?”

Hint: other people’s critical or judgmental opinions do not count as evidence! Ask yourself, “Does this belief serve me?” “When and why did I develop this belief?” “Would I be better served and happier if I did not believe this?”

Even if you are still unsure, ask yourself this important question: “Is it possible that this belief is not true?” The answer to this one is almost always a yes. Anything you can imagine can be created. Once you acknowledge that the possibility does indeed exist, the door opens toward embracing a new belief.

3. Rewrite your beliefs! Flip around any belief that reflects the opposite of what you desire. If your belief is “There’s no point in writing my novel. I’m not a skilled writer and no one’s going to want to read it.” change it to “I’m so excited to get my novel written. I am a good writer and everyone who reads my story is going to love it!”

Any time you catch those limiting thoughts rising up, rephrase them into the exact inverse.

You can write these new beliefs-in-training down – scripting and reading daily affirmations are techniques that work well for many people. But only do this if it feels good. If writing or reading affirmations feels like a chore instead of an inspired step to what you desire, it’s not going to help.

It takes practice challenging and changing limiting beliefs but you will get better at it the more you do it.

10 Positive Affirmations To Say To Yourself Every Day

Negative self talk can sabotage your efforts to overcome limiting beliefs. Make it a practice to never say anything about yourself that you wouldn’t say to a friend. How cruel we are to ourselves sometimes!

Just like #3 above:rewrite your beliefs, flip negative self-talk around:

“I’m not smart enough.” can become “I am very intelligent and perfectly suited for this job/project/activity.”

Again, it does take practice. The first step is to be conscious and aware when negative self talk happens. Stop it in its tracks and don’t let it take hold. Replace it with affirmations and strong positive thoughts. This will be difficult in the beginning but eventually you will rewire your brain to automatically respond to negative self talk with, “That is not true!.”

Don’t let other people fuel your own limiting beliefs

It is hard enough to stifle the negative thoughts in our own heads, let alone add the expectations, doubts and fears of others. It is great to get constructive criticism and advice to help you achieve your goals but it is wise to recognize and distinguish between those that want you to grow and expand your world and those that want you to stay in the exact same place forever. Those people have their own issues and limiting beliefs. You don’t need to compound your own limiting beliefs by internalizing the limiting beliefs of others too.

Try no to discuss your dreams and desires with people who will only focus on a list of reasons why what you’re planning won’t work – even if they’re completely well-meaning. Their limiting beliefs will enhance and influence your own and they may not be capable of grasping the bigger vision you have for your life.

Picture yourself from the outside looking in. What would the person you want to be believe about herself? What daily activities would she engage in that reinforce these beliefs? Does she journal, stretch, or meditate in the morning? Does she prepare healthy food for the rest of the week every Sunday night? Does she dress a certain way? Make time for specific hobbies? As you go through your day, act as if the reality you desire is already here. You are already the person you want to be. If you strip away the beliefs that do nothing but hold you back, you’ll uncover her.