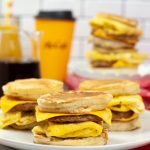 Can I just say I love the McDonald’s Sausage McGriddle!

Yes, I know it isn’t the healthiest of breakfasts but honestly, it gets so cold here in the winter that I just have to have something that will stick to my ribs, as my mother used to say.

Sad to say, but I’m not always able to make it to the restaurant by noon. Even though they serve breakfast all day now, the Sausage McGriddle is not on that list.

Plus, I love to eat breakfast anytime of day really.

So I was thrilled to find this copycat recipe of the Egg and Sausage McGriddle!

The best part is that with a few modifications, you can make this a much healthier breakfast for you too if you choose. Substitutions like egg whites only, turkey sausage and low calorie syrup will still give you all the flavour but not make you feel guilty for indulging.

I hope you enjoy this recipe as much as I do!

Scroll down for your printable recipe card.

If you love McDonald's breakfast, then you are going to love this delicious copycat McDonald's Sausage McGriddle recipe. So easy to make and you can substitute some ingredients to make a healthier version with my suggestions.

As an Amazon Associate and member of other affiliate programs, I earn from qualifying purchases.

Did you make this recipe?