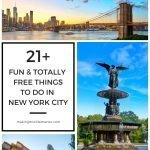 New York City is one of the most incredible tourist destinations to visit in the world, but it can also be one of the most expensive. There are endless things to see and do, but did you know that many of them are free? With some advanced planning, a trip to The Big Apple doesn’t have to break the bank – here are some brilliant ideas for the best free things to do in New York City.

Things To Do In New York City For Free

Times Square can be found in midtown Manhattan, in the heart of the theatre district and is one of the most famous tourist areas in the world. With its enormous billboards, Times Square has undergone a large and expensive renovation from its seedy history in the 1970’s and 80’s and now boasts a number or shops, restaurants, offices and photo opportunities on the bright red steps above the TKTS ticket booth. The is one of the busiest areas of the city, but is completely free to see and experience and definitely worth visiting at least once.

St. Patrick’s Cathedral is a beautiful Roman Catholic cathedral church and is completely free to enter. It is the largest decorated Neo-Gothic-style Catholic cathedral in North America and can accommodate 3,000 people. It is built of brick clad in marble and contains beautiful stained glass, art works and shrines. Photography is allowed without a flash, but be mindful that it is hosts numerous services every day.

Most famously featured in the film Breakfast at Tiffany’s, visitors are allowed to step inside the iconic store. On the second floor there is an autographed picture from Audrey Hepburn and the famous Tiffany diamond. Staff are incredibly welcoming and friendly and tourists are not given a time limit.

First opened to the public in 1913, Grand Central Terminal has been featured in some of the biggest Hollywood blockbusters and is completely free to visit. With over 750,000 daily visitors, over 90 stores and restaurants, The Information Booth Clock, the Whispering Gallery, the Main Concourse celestial ceiling, the Tiffany glass clock & Transportation statuary and even a tennis court, Grand Central has become an unofficial meeting place for thousands of people every day. Don’t forget to look upwards to see the dark square patch left behind after it’s renovation in 1978!

The library is the second largest public library in the US and contains over 53 millions items. Also an iconic movie location, the stone lions (named ‘Patience’ and ‘Fortitude’) staircases and main Reading Room are all free things to see. Free tours are available at 11am and 2pm Monday to Saturday and 2pm Sunday, although the tours are closed on Sundays during the summer season. Photography is allowed (without a flash).

Central Park – between Upper West Side and Upper East Side

Covering 843 acres, Central Park attracts 40 million tourists every year and is the most visited urban park in the United States. It has been used as the backdrop in a number of movies and hosts events, attractions, concerts, street performers and even a zoo.

Located near Central Park West between 71st and 74th Streets, Strawberry Fields is a 2.5 acre area of Central Park that pays tribute to the late Beatle, John Lennon, who was killed outside the Dakota Hotel adjacent to the park. In the centre is the ‘Imagine’ mosaic – commemorating his most famous song – and this becomes a point of remembrance each year on the anniversary of his death.

If you are a Beatles fan, this will probably be on your list of places you wish to visit. Located at on the northwest corner of 72nd Street and Central Park West in the Upper West Side of the borough of Manhattan. The entrance has a guard so you won’t be able to go on the steps but you will be able to see where John Lennon took his last breaths.

Located just north of the Conservatory Water at East 74th Street, Alice in Wonderland is a bronze statue that was constructed in 1959 by José de Creeft and designed for children to experience Lewis Carroll’s classic story. Large parts of the statue are now polished as children are invited to climb and sit among the characters.

The Bethesda Fountain, measuring at twenty-six feet high by ninety-six feet wide, is one of the largest fountains in New York and the only sculpture to have been commissioned as a part of Central Park’s original design. It is also known as Angel of the Waters and was designed by Emma Stebbins in 1868 and dedicated in 1873, making Stebbins became the first woman to receive a commission for a major work of art in New York. It features an eight-foot bronze angel who stands above four small cherubim representing health, purity, temperance and peace and has been the backdrop for a number of scenes in TV and film productions.

Central Park boasts a number of beautiful bridges and arches that are completely free to the public and provide a beautiful view of different areas of the park. For a comprehensive list of where these can be found, visit the link here.

The Central Park Mall runs through the middle of the Park from 66th to 72nd street. Boasting one of the largest plantations of the American Elm, the Mall was originally designed to accommodate the width of carriages for wealthy visitors. It is still a popular gathering place and hosts numerous street performers. Towards the northern end of the Mall is the Bandstand that has been featured in films such as Breakfast at Tiffany’s, and at the southern end is the Literary Walk that contains statues of William Shakespeare, Sir Walter Scott, and Robert Burns.

Located in NYC’s beautiful Greenwich Village, Washington Square Park is a 9.75 acre area of open space that is free for the public to visit, and hosts 12 million visitors a year. At the northern area of the park is the Washington Square Arch (most famously featured in the film When Harry Met Sally) and it boasts a beautiful fountain that is popular both with locals and tourists. The area has a history of art and culture, and has been the location for a number of key political protests and activists.

Roosevelt Island is a small strip of land located on the East River in between Manhattan and Queens. In 1865, a hospital was created to quarantine people suffering with smallpox, and the ruins of the hospital still stand today. Built in a Gothic Revival style, the hospital treated approximately 7,000 patients a year between 1865 and 1875, and it was then turned into a nurses dormitory, eventually being abandoned in the 1950’s. It was declared a city landmark in 1975 by the Landmarks Preservation Commission, and its walls were reinforced. Becoming somewhat of a feline sanctuary and home to stray cats, it is possible to see these ruins completely free of charge behind the fencing on the island.

Opened in 2009, The High Line is a 1.45 mile long elevated walkway that has been converted from the former New York Central Railroad spur, after being saved from demolition by the City of New York and neighbourhood residents. It is open from 7am – 10pm and is free to experience, offering seasonal plants and flowers, art exhibitions and a nice view of the west side of the city and the Hudson River.

The National September 11 Memorial & Museum (also known as the 9/11 Memorial & Museum) commemorates the September 11, 2001 attacks, which killed 2,977 people, and the 1993 World Trade Center bombing, which killed six. The memorial is located at the World Trade Center site, the former location of the Twin Towers that were destroyed during the September 11 attacks. While the museum charges $26 for a standard Adult ticket, there are two 1 acre memorial pools with the largest man-made waterfalls in the US that are located in the place where the original Twin Towers once stood, a memorial park and the Survivor Tree, that are all free to see. Nearby is the Oculus, an amazing architectural structure and train station, and Liberty Park, which contains The Sphere which once stood between the two towers.

Marked as a National Historic Landmark in 1993, African Burial Ground is the oldest and largest known excavated burial ground in North America for both free and enslaved Africans, protecting the historic role slavery played in building New York City. It contains the remains of more than 400 Africans buried during the late 17th and 18th centuries and serves to honour both those buried at the location and those who fought for the protection of the site. The indoor centre and outdoor memorial are always free from Tuesday-Saturday. For more information, click here.

The Staten Island Ferry is completely free, travelling from lower Manhattan to Staten Island and offers beautiful views of the Statue of Liberty, Brooklyn Bridge, Ellis Island and Lower Manhattan. It operates every half an hour, and once arriving at Staten Island you will be required to leave the ferry and go into the terminal before boarding the next one.

Completed in 1883, Brooklyn Bridge is one of the oldest roadway bridges in the United States, the world’s first steel-wire suspension bridge and the first fixed crossing across the East River from Manhattan to Brooklyn. Designated as a  National Historic Landmark in 1964, it is free to the public to walk across and provides stunning views of Lower Manhattan, Brooklyn and the Statue of Liberty. Be aware to stay on the left when walking – a cyclists lane is provided on the other side.

An often overlooked area, Paley Park is a quiet oasis in the middle of the city, with a 6.1m high waterfall and surrounded by ivy covered walls. It’s a small, tranquil area that allows for quiet reflection, with the sound of the running water designed to mask the hustle and bustle of the city. It is free to enter and a great place to take a break and eat a quick lunch.

Don’t get over-whelmed by this list of free things to do in New York City. Just pick the places you will want to visit and make a plan in advance. If you organize by location, it is totally possible to get to quite a few in one day. Make sure to account for lines (because free means more people), bathroom breaks and snack times.

Have a great time!

Here are some other travel spots you may be interested in: