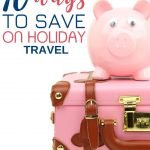 Whether you’re visiting family from out of town or you’re planning a Christmas vacation, you likely have a reason to travel this holiday season. Unfortunately for travellers on a budget, you’re not alone.

Last year saw a record-breaking number of U.S. airline travellers during the holiday season. With so many people fighting for travel tickets, airlines can increase their rates by hundreds of dollars without repercussions.

Although it will take some extra effort, there are plenty of ways to save on your holiday travel. With these money-saving tips, you can avoid overspending when travelling in December and early January. Don’t book your tickets until you’re sure you found the best prices!

Holiday Travel Tips That Save You Money

1. Be Flexible with Your Dates

During the holiday season, it’s best to fly when other people aren’t likely to be doing so, too. Avoid flying on the weekends, and click on “show flexible dates” when searching for airline tickets on Expedia. Flying just a day earlier than you originally planned to could slash your ticket costs!

To see this savings trick in action, search for flights between New York City and Los Angeles on Expedia. The cheapest round-trip tickets cost $750 when you fly on December 21st and December 28th. If you leave on December 18th and head back on December 26th, you’ll only spend $454.

[box]All prices in this post were researched on the day of publishing and may have changed.[/box]

Some major cities have multiple airports to fly out of. Sometimes, choosing a different airport could save you money on tickets. Of course, you’ll want to make sure the other airports aren’t too far away from where you need to go – otherwise, you might spend too much on travelling from the airport to your destination.

If you’re booking a last-minute flight to Paris from Washington D.C., you’ll save hundreds by choosing the right airport. A holiday season flight between Washington Dulles International Airport and Paris’s Orly could cost $1,665. Travellers who instead fly into Roissy-Charles de Gaulle would pay as little as $956. What a steal!

When you buy a cheap airline ticket, you’ll likely have to pay extra for checked baggage. Avoid spending more by travelling light. On many flights that charge extra for checked bags, you’re entitled to bring a carry-on bag and personal item at no extra cost. That carry-on can often be the size of a small suitcase, which could hold enough items for a week-long trip.

Some airlines (like United) offer a Basic Economy fare, with very low prices but unfavourable travel restrictions. These tickets are non-refundable, and typically don’t include a carry-on bag. Avoid buying these tickets, since you’ll wind up paying more than if you just bought a regular economy ticket.

4. Consider a Bus or Train

Oftentimes, train and bus tickets are significantly cheaper than airline seats. It will take you longer to reach your destination, but it’s worth looking into for somewhat shorter trips. Look into reputable companies like Greyhound, Trailways, and Amtrak for travel within the United States, or Eurostar in Europe.

A round-trip ticket between Denver and Salt Lake City could cost $200 on a plane, $118 on Amtrak, or $144 on Greyhound. The savings are even greater between closer destinations – you could spend $118 on a flight between New York City and Boston, or just $16 on a Greyhound bus.

5. Choose AirBnB Over a Hotel

Hotels are expensive regardless of when you travel, but prices skyrocket during the holiday season. Instead of settling for a bed bug-infested (and still overpriced) motel, try a local AirBnB. Choose from hundreds of beautiful properties at affordable prices. Sometimes, you can book an entire house for less than a hotel room!

If you’re planning a trip to Orlando for Christmas, you can stay in a comfortable guest suite for $37/night, a private room with pool access for $29/night, or over $100 for a hotel room. Take your pick!

If you’re visiting family for the holidays, see if you can stay at their house. Offer to buy a blow-up mattress if they don’t have a guest room or a futon. You’ll save money on lodging, while spending extra time with your family. Bring some food to thank your family for their hospitality!

Alternatively, try staying with friends in the town you’re visiting. The holidays are the perfect time to reconnect with people you don’t get to see often.

7. Stay with a Couchsurfing Host

Couchsurfing is a safe, well-known network of hosts that let travellers stay with them for free. While some hosts only have a couch to offer, others can provide you with a bed, futon, or even a private room. Look for hosts with verified reviews to give you some peace of mind.

While Couchsurfing is far more popular in big cities than in suburbs, you can find a host in almost any town. The website has been around for 20 years, so the host network is huge!

8. Don’t Put Gifts in Your Luggage

Putting holiday gifts in your luggage takes up tons of space, which means you’ll need to pay for more bags on a plane. You also run the risk of carrying an overweight bag. Overweight bag fees can cost close to $100, so it should be avoided at all costs. Instead, have your gifts shipped to the stores you bought them from and wrap them at your holiday destination. When you need to fit your puffy coat in your suitcase, you’ll be glad there are no gifts to pack around!

9. Use Your Travel Miles

Do you have a rewards account with your favourite airline? Now’s the time to use those points to cover travel expenses! It can take a long time to rack up enough points to pay for a flight, but airline credit card holders can easily earn free flights for Christmas. Check your account balance to see how you can save on plane tickets.

Amtrak trains often have dining cars. Don’t fall for these money traps! Not only is the food expensive and subpar, but you can bring your own food on the train. When travelling by plane, fight the urge to buy expensive wine and overpriced meals. Instead, grab some snacks and sandwiches at the airport. You’ll wind up with more food for less money!

While some of these travel tips will only save you pocket change, others can significantly reduce the cost of your trip. Whether you wind up with extra cash for food or enough money for another trip, you’ll be glad you didn’t overspend on holiday travel!