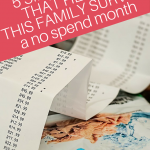 Around the beginning of November my wife offered us a proposal: Let’s try to eat all the food in our house. Not all at once, mind you, but over the month. See, we are notorious for buying on sale, stocking, forgetting and then tossing food in the garbage. Especially leftovers, and the same pattern ensues each and every time, “I forgot we had meatloaf. And when did we have rice pilaf. Do you think this is still good? What a waste.”

We are by no means unique in this pattern. According to the USDA 30-40% of the US food supply — that’s about 131 pounds of food equaling approximately $161 billion is wasted.

More recent estimates however suggest that these numbers from 2010 are conservatively low. A number of environmental and food activists, food packagers and producers, believe the amount of food wasted at both the retail and consumer level is closer to 50%. Yes, you read that right.

At the beginning of November my wife and I performed our seasonal food inventory ritual. Everything in the basement deep freeze was catalogued; the contents of the side by side in the kitchen were listed, the pantry was eyeballed and the kitchen cupboards were gone through.

Step 1: Do A Complete Food Inventory

Once that was done my wife proposed the following: No Shop November. For the month of November we would eat only the food we currently had in the house. Milk, eggs, fruit and bread were the only exceptions — those we could buy. But everything else — snacks, cereals, meats, cookies — would have to last the month and once they were gone, they were gone. No shopping.

Step 2: Decide On The Exceptions

Before going any further I need to explain the addiction my daughter and I have with respect to snack foods, in particular crackers. Goldfish, Cheez-its, Saltines, Ritz, Cheese Nips, Triscuits — we don’t tend to discriminate. My daughter is also a big consumer of chips, Jax, Doritos, Smart Food etc.

When the “no shop” concept was proposed I am certain my daughter did a quick calculation to see how long the current rations would last. In fact, after about a week had passed I tried to open a bag of Parmesan Goldfish crackers. Standing in the pantry I wrestled quietly with the bag until, like a little silent ninja, my daughter popped up seemingly from nowhere.

“What are you doing,” she asked.

“Step away from the goldfish,” she spoke with the low steady cadence of someone engaged in an unexpected Mexican Standoff. “They have to last a month.”

I put the goldfish crackers down and moved from the pantry past my tiny blonde nemesis, our eyes locked, my expression reminding her that she may have won that fight but I would be back… she had to sleep some time…

Step 3: Police Yourself & Others

In all honestly the exercise has not been all that bad. You do become more flexible with your culinary options. We tossed out fewer leftovers, and we did eat many things that often go overlooked in favor of what was close at hand. Having fewer options certainly makes you mindful of food in a number of ways. For myself, I found that portioning things out seemed more conscious. Where I’d usually destroy a box of Cheez-its, I limited myself to a handful. My daughter tended to do the same.

The one major allowance for shopping during November was, of course Thanksgiving. But even then, my wife was able to keep the budget low despite the fact that we cooked two entire meals: one for us and one for another family in need. Still, we spent less than $100 to feed two families. We managed the leftovers pretty well to so in the end only some dark meat and butternut squash went uneaten.

Overall, I don’t know exactly how much money we saved because, as my daughter pointed out, we might have gotten takeout a few extra times instead of grocery shopping. What I do know is that my wife felt that the exercise was so successful that she suggested carrying it through December.

My daughter’s reaction, “Noooooo. I have no crackers or lunch meat or bread! I can’t eat Peanut Butter anymore! Why? Why? Why?”

Ok, that response was only marginally blown a bit out of proportion, but her concerns are adequately represented. Despite my daughter’s reservations we are continuing the general idea behind the “No Shop Project”.  We certainly have wasted less and made use of more. That was the overall plan. And it taught us to make do, a valuable lesson no matter what. My wife even made me adjust her birthday dinner menu to utilize what was in the freezer, rather than shop for something else.

Step 5: Stock Up On Sales For The Next No Spend Month

Truth be told: my wife did a little “stock up” about a week ago. Chips, cheese puffs, cheese crackers, four boxes of cereal (on sale for $1.49); you know the vital foodstuffs that’ll keep her adolescent daughter and sodium addicted husband from turning into gluten-free ogres. No one needs that running around the house over the next month, especially with Christmas on the horizon.

Christina and Anthony Amore live and work in southern Rhode Island. Both are college professors and are raising two young adult girls.