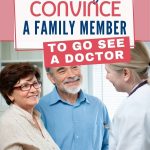 Many of our loved ones are of that generation, who saw going to the doctor as a sign of weakness. It’s a bizarre mentality for the modern generations, as being in touch with your mental and physical health is seen as completely and utterly normal. For a generation that had to go through wars, and so many social hardships, relying on oneself was the only way for some of them to remain stable.

So how do you persuade someone stubborn and set in their ways, to go and see a doctor about a health issue? Very often, it’s a case of simple fallacies which can be eroded with some simple logic. However, sometimes it’s a case of fear or looking weak to their family and friends, admitting to themselves that they aren’t as strong as they thought and even silly fears that acknowledging their illness will make it worse.

Do not guilt them

Guilitng someone into doing something is never ever going to work. Firstly, you can sense the guilt and shame tactics from a mile away. Don’t try to throw out the line ‘don’t you care?’ to someone you want to convince. This is challenging their morality both in ethos and in authority. Guilt is not a motivator, instead it pushes people further away. So if you want to convince grandpa to go and see a doctor, don’t ask him whether he cares about seeing his grandchildren grow up or not. Of course he does! This is why so many of us are confused as to why they don’t take care of their health then!

But, guilt never works, instead you could use what they care about to usher them along. How about you say that your grandpa’s grandchildren are afraid of going to the doctor and by him going to the doctor and bringing them along with him, they could learn there’s nothing to be afraid of. Arrange something with his doctor, tell them about his stubbornness and the tactic you are using. This will hopefully allow the grandchildren to accompany him into the doctor’s office and it can be a learning experience for them and a chance for him to actually get the treatment they need.

Pitch the convenience of a virtual doctor

They don’t want to go to the doctor physically, fine, the doctor can come to them through their screen. Get a laptop or a tablet and access one of the great online doctor services at your disposal. These are real doctors, working out of real practices and surgeries, able to be contacted and dispense their professional opinions on any matter relating to your health.

Virtual meetings with doctors are quite common now, since the pandemic left us no other choice. The issue might be for someone who is stubborn, that they don’t want to physically meet someone. It could be an ‘embarrassing’ issue that they don’t feel comfortable showing. So with the aid of a webcam and not actually being in front of someone, could help them to come out of their shell. Just get the right tools, a good webcam with HD quality, a good connection and a doctor that is willing to do an appointment virtually.

Help them fight through the fear

It’s not always old people that are afraid to go visit the doctor. It could be your children. If they know that their next appointment will involve needles, they could be gripped by fear and running away with their own imaginations. Rather than force them to go, tell them that it’s up to them if they want to go. Just make sure you tell them what could happen if they don’t go. Logically they will agree that they need to go but they have to fight through their fear.

Tell them that it’s perfectly all right to be in fear of needles, but that the images we have in our head are always far worse than the reality. Use your own experiences to inform them of how needles work and what else they might be afraid of. It can be very reassuring to know how the meeting will go. Running it through their mind over and over can make things logical and methodical, so that the focus on the process helps to distract them from the fear.

It’s a little odd to try and convince someone to take better care of their own health by visiting the doctor. But human beings are odd little creatures. Don’t go for basic guilt tactics, be logical, try to use tactics which never place blame or shame on the person.