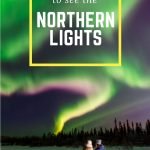 Seeing the northern lights is high on many travelers’ bucket lists. This natural phenomenon, formally known as aurora borealis produces a colourful light show in the night sky.

Aurora borealis can only be seen from high-latitude regions of the planet, so some Arctic countries have built much of their tourism industry around their privileged location. While they’re not visible every night, some cold regions have better sighting odds than others.

These places offer a high probability of seeing the northern lights if you find a great viewing spot – an area with no light pollution and clear skies.

Since you can’t predict the weather before your trip, don’t make seeing the northern lights the only reason to travel. Instead, plan to see everything else that destination has to offer, making room to chase the aurora if the weather permits. Make sure to pack a high-quality camera for your trip!

Where To View The Northern Lights

This American city sits 200 miles south of the Arctic Circle at 64’50 degrees latitude. While its metropolitan area is the second most populous in Alaska, that isn’t saying much – there’s only 32,000 people in the city. Fairbanks is one of the best places to see the northern lights, with a long aurora season and little precipitation. Visitors who visit Fairbanks for three nights have a 90% chance of seeing the aurora borealis!

For the best shot at catching the northern lights, visit Fairbanks between August 21st and April 21st. You can book a cabin in a prime viewing spot, or have your hotel’s front desk alert you when the aurora is out.

Yellowknife is the only city in its entire Canadian province. Its flat landscape and high latitude lend to a high chance of catching the aurora borealis. Being right at the center of the Auroral Oval means that Yellowknife is the place to view the northern lights in Canada. If you stay for more than three nights, your chances of seeing the lights are a whopping 98%!

Book an aurora viewing tour with Aurora Village. They’ll pick you up from your hotel and bring you to their campground for a peaceful sighting experience.

Reykjavik is a booming tourist destination due to its beautiful landscapes and prime location for aurora borealis sightings. While you’ll get the best light shows on the outskirts of the city, you can also see them downtown. Despite Reykjavik being Iceland’s capital, you don’t need to travel far to see some vibrant lights!

On the coast of Reykjavik, the north shore and sculpture walk are among the best places to see the northern lights. Your best chances of viewing them are between late September and late March.

Rovaniemi is located in Lapland, a region of Finland that sees frigid temperatures and darkness that lasts for weeks. This city only gets 3 hours of sunlight throughout the entire month of December, making it easy to see the northern lights in the winter. You can see the aurora borealis in Rovaniemi 150 days a year from August until April.

Since Rovaniemi is touted as Santa’s home, the city is built for tourism. Step 10 minutes outside of the city center to the Arctic Gardens, where you won’t have to worry about light pollution.

While Rovaniemi sits on the Arctic Circle, there are cities in Lapland that are even farther north. Inari is a Finnish municipality with a population density of 1.2 people per square mile. At 68’54 degrees latitude, there is absolutely no sunlight in the winter, but 24 hours of sunlight in the summer. While Inari’s darkest season is from November-January, the best time to see the northern lights is in March, when cloud cover is minimal.

Since Inari has so few people, there aren’t many accommodations in the area. Choose an AirBnB or one of two hotels recommended by the municipality.

This northern Norwegian city sits at 69’40 degrees latitude, yet it’s warmer than similarly positioned cities. Despite being so far north, winters are rather mild, making Tromso a more comfortable place to see the northern lights than other cities on this list. There are plenty of places to stay in Tromso, but you’ll want to get away from the city to see the aurora. Thankfully, Tromso has plenty of touring companies that specialize in aurora excursions.

The best time to see the northern lights in Tromso is between October and March. If you don’t want to take a northern lights tour, you can head up the mountain on a cloudless night via Fjellheisen cable car.

Abisko National Park is about as far north as you can go in this Scandinavian country. The village only has 85 inhabitants! Abisko is in the middle of nowhere, but you can get there by train from Oslo. Your journey will take 24 hours, but it’s worth it to see the aurora with no light pollution.

To see the northern lights in Abisko, you could join a light chasing tour. Alternatively, walk to the harbor and look towards Mount Noulja.

Believe it or not, you can see the northern lights from Michigan! The Upper Peninsula area has little light pollution, and looking north towards Lake Superior gives you an unobstructed view of the aurora. On nights with strong auroral activity, you can see them at lower latitudes. Use this to your advantage when visiting Michigan.

The nearby Mackinaw City is home to a dark sky park, which is exactly what it sounds like. You can get a great view of the lights from here.

This city in northwest Russia sees 40 days of total darkness a year, making it a great spot to view the aurora borealis. From mid-September until mid-April, you can see the lights if you spend about a week in the area. While you’re here, try out other Arctic activities like dogsledding!

If you take a train to Murmansk from Moscow, expect to spend 35 hours in transit. Instead, you can take a 2-hour flight there.

The northernmost town in the world (other than those established for research purposes) is Longyearbyen in Norway. It sits at 78’13 degrees latitude, and has a decently-sized tourism industry. If you’d like to visit the city, it’s easy to find lodging here.

From November through February, Longyearbyen sees no sunlight. This is the best time to visit if you’re looking to catch the aurora. During this polar night period, you may even see the northern lights at noon!

Keep in mind that the northern lights can be hard to predict – there are many factors that determine whether they’ll be visible. In general, though, you’ll need no light pollution, dark skies, and high latitudes. Whether you travel to Europe or seek the lights in North America, you’re in for a wonderful show!