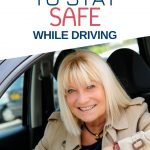 When trying to find the right car, there’s one thing that even the most studious car buyer will often forget, which is particularly bad considering how important it really is. That thing is, of course, safety. The safety of a car is something that often gets ignored, not because people don’t care about staying safe behind the wheel but because it’s something that the vast majority of us take for granted. You just sort of assume that modern cars are built to be as safe as possible. And that’s a pretty solid assumption.

1. Bring down your speed

It’s shocking how many people simply don’t seem to realize just how much of an impact their speed has on how safe they are on the road. Even a few miles an hour over the speed limit can have potentially fatal consequences. Sure, you might be in a hurry, but getting somewhere late is a whole lot better than having to hire a personal injury lawyer because you’ve been in a crash. Remember, the speed limit is there for a good reason.

However, if you are a car accident victim due to somebody else’s over-speeding, you might as well consult a lawyer to file the lawsuit against the responsible party; learn more here.

This is one of the simplest and most useful hacks for making sure that your car is driving as safely as possible. Take a penny and point old Honest Abe head first into the tread of your tire. Does the tire cover his head? Perfect. You don’t need to worry about a thing. But if it doesn’t cover him then your tyres tread is worn down, and you need to replace them as soon as possible. Tires with worn down treads aren’t going to grip the road, and your chances of skidding and crashing will go up significantly, especially in wet weather.

3. Keep distractions to a minimum

Keep your phone somewhere where you can’t see or hear it. This might seem like going overboard a little bit, but the last thing you need is anything distracting you from the road. Any car accident lawyer will tell you that you only need to look away from a moment for something to happen. It might even be a good idea to turn your phone off completely when you’re driving. After all, there’s no reason for you to be using it while driving and any calls can wait until you reach your destination. The same goes for your GPS and music.

No matter what you’re like as a driver, there are always risks when you get out on the road. In a perfect world, everyone would be as careful a driver as you are but sadly that’s just not the case. As much as you might want to, there’s little that you can do to change the weather or prevent other people from driving irresponsibly. The best thing that you can do is make yourself and your car as safe as possible so that, if something does happen, you can be sure that you and anyone riding with you are in as little danger as possible.