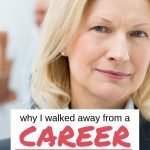 When I told people I was effectively dropping out of the career I took 25 years to build, there was a wide range of responses. I was well-respected and had accomplished many things. On the outside, I seemed to be having fun while managing a fast-paced team.

Looking at the statistics, I had much of the best that corporate life could offer.

Are you OK? What are you going to do?

Reactions started with disbelief and then quickly moved to the assumption that I must be moving on to something else. Some other position with some other company. But I wasn’t. And that was hard to explain.

Because what I was going to do instead seemed so strange. I started to try to express the unexplainable in terms which people might understand. At least the people I knew. I was to discover later, there were lots of people out there who ‘got me’ and what I was trying to do. I just didn’t know them yet.

If I told people I needed a break, that seemed to pacify the look of shock and concern for my mental health. I had been working a full-time+ schedule for about 30 years, I deserved to take a breath. I had even worked part-time on top of attending high school full-time.

There was never a decent gap, always straight from one thing into the next. Graduate college on Friday and start a full-time job on Monday. That was what I thought I was supposed to do if I was going to earn ‘enough’ money.

If I told people I wanted to travel with my teenaged kids and my husband, who could work remotely from a country like Spain or Italy, that garnered looks of respect and acceptance. I was being noble for the benefit of my children and their life experience. I was making them better people and creating shared family memories which would last a lifetime.

Those 2 excuses bought me about a year or so. An acceptable amount of time to go off and have my fun and then return to what? Most people did not question me further. There was a general assumption that I would return and seek my place in the corporate world once again. Get back to my chosen ladder and begin the climb up the wall once more.

How about being my own boss?

When I spoke about starting my own business – an online lifestyle business, I got confused and concerned looks. People didn’t know what that was. Complicating the conversation further, neither did I. Or at least I couldn’t explain myself very well. I knew I didn’t want ‘a job’, in the classical 9 to 5 sense. I wanted to create a life for myself where I could earn money doing a variety of different things and work with all sorts of people.

I think everyone I spoke with, understood and agreed with my passion for trying out a new way of spending my time. But they kept waiting for the finale. And they were far too polite to ask, “how are you going to be paid”?

They didn’t see the ‘job’ in what I described as much as they saw ‘goofing off and having fun’. At that point in the conversation, I would start to get a little scared and worry I was making a huge mistake. It was clear that without a solid business plan, including financials, many people thought I was not being serious.

But I was confident in my ability to complete that step, in due course.

I had become very clear on a few things:

What I had realized is, there is no amount of money and no alternate job which could keep me happy in this framework anymore.

Instead of enjoying the challenges been thrown at me, they felt more like chores. New ideas were not easily implemented and took so much care and feeding, to the point of exhaustion. And the frequent and extensive travel that had once been exhilarating was becoming tiresome.

I became aware of not-so-nice, albeit temporary cognitive effects from long haul travel. My brain was just not working properly when I was sleep deprived.

I began to wonder; how do other people finally decide it is time to leave a corporate job? That question could also be asked for retirement as well. I was curious, how does it work? Was there a 12-step guide?

If so, where could I find it and was I already on the path? Enough people had quit their jobs in recent years, but they were generally much younger than me. I felt like I had missed the exit in my thirties and all those doors were blocked for me now.

I also knew I could not wait another 20 years. I did not want to get bitter and resentful.

Actually ‘doing it’ is much different from talking and planning.

The reality is that to achieve freedom from anything you must conquer fear. When I think back, fear has held me in place my whole life. It has been what has driven me to succeed, play by the rules and earn the money which I thought was the key to my happiness. In a way, I owe fear a huge thank-you for keeping me in line and not letting me get into heaps of trouble.

But I think fear became too strong, somehow. As much as fear drove many of my accomplishments, I have also acquired skills and competencies which are transferable to anything I might want to do in the future. Fear has no part to play in my new adventures. Learning to dampen my fear before it begins to rise is an ongoing practice.

Then, the day to resign was upon me. I was super calm and nervous at the same time. I simply expressed that the book of my life with this company and this career is coming to an end, the last chapter is being written. It was a such a nice metaphor, something which I was happy to say, rather than sad.

But, it is one thing to talk about this kind of life change and quite another to actually do it.

Luckily this is not a script for television, because my experience was not dramatic. At least not in the theatrical sense of a person storming out of a building after telling their boss to “take the job and shove it”.

Everything in my case was amicable and well thought through. Plans were devised, everything was arranged, and announcements were carefully scripted.

I suppose it should not be surprising, but all efforts were made for the well-being of the employees left behind and the general health of the corporation. Minimize the disruption to regular business as much as possible. If it’s done properly, the company will barely miss a beat and life will go on. Because I had chosen this option for myself, I assumed any support I needed had to be sourced by me.

One night, as I tossed and turned fretting about my future, I decided to get up and write everything down which was bouncing around me head. My basic wondering had to do with why the support for someone leaving corporate life was so hard to find? Why did it feel more like a divorce and less like a rebirth? Why couldn’t it be more like a graduation of sorts?

There is a huge industry built around helping people lose weight. A different theory, diet and exercise plan for every segment of the population. People are making and spending loads of money on solutions that should not be so difficult that they need an expert doctor to explain. Yet, the biggest life change that most of us will go through is when we change or leave work.

Midlife can be a perfect time to stir things up. This is not a time of crisis, as the media likes to portray it. Rather it is an excellent opportunity to honour and learn from what has already passed. Assess skills learned and re-evaluate priorities and relationships.

Because my work ranked so high in my priorities and I spent so much time away from home, I knew I had to start there in my self-evaluation. I didn’t like what I found. Somewhere along the way, over many years, different jobs and companies, I had given up too much autonomy over my life.

When I was young and learning something new and thrilling every day, it was a bargain that was easy to make. I felt on the winning side of the arrangement. Then, over the years small injustices started to creep in:

For all this effort and sacrifice, I started to feel that I was not being compensated appropriately. To be clear, I use compensation as an overarching word to describe the balance sheet of ‘what I was getting in exchange for what I was giving’.

When the learning piece started to fall away and when I started to feel less and less autonomy, no amount of cash could equal the score.

I like to think of my creativity and my desire to do good work, residing in a cup or reservoir. That cup needs to be filled. Over much of my career, I was blessed with ample opportunities to fill my cup. At the end, I realized there was a hole in the bottom, because no matter how hard I tried, I kept seeing it empty, usually when I needed inspiration most.

Christine is a world traveller, lucky enough to have a loving family who support her dreams to learn, create and give back. Christine continues to explore her creativity and find joy in her next chapter of life.

Hello, I am so glad to have found your blog! My blog is also centered around mid life issues and the activities I have found helpful in navigating this transition. It is a year old and, now that I have found some footing, I am trying to be proactive in seeking out others in this stage of life. Your article on Pinterest presence has been quite helpful, thank you for sharing it

I'm a practicing psychologist and I frequently remind myself and others, "Not many great decisions are made out of anger or fear." Sounds like you're going in a direction away from chronic fear and are headed toward ambiguity -- which is kinda scary but also very freeing! Good luck to you.