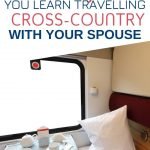 Almost forty years ago, Randy and I wanted to jump in a van and drive across America. But work, family, and life intervened and we never did…until this past week. We took Amtrak’s Southwest Chief from Chicago to Los Angeles. It was during this amazing journey, I learned several surprising things about being confined to a small space with your husband.

Things I Learned About Travelling With My Husband On The Amtrak

1. My husband and I can survive days in a place the size of a walk-in closet – We knew space would be tight, so we got the best cabin we could. It was just big enough for our own bathroom, two bunks, and a small tray-sized table by the window.

That first afternoon, we sipped wine and ate cheese and crackers, watching the vastness of the Illinois countryside go by, its flatness so different from hilly Connecticut. I was already hooked.

2. I could actually climb onto an upper bunk — Each night our handsome steward, Roman, somehow turned our chair and couch into beds. I still don’t know how he did it. And of course, I drew the upper one.

As the train chugged through Iowa that first evening, I realized getting up by ladder was no problem. It was getting down. Remember that Lucy episode where she’s trying to be a ballerina and ends up hopelessly tangled and upside down at the barre? That was me trying to use the bathroom at 1:00 a.m. There I am, hanging like a fruit-eating bat, while Randy sleeps blissfully away (more on that later).

3. Showers were challenging. – Yes, I’m spoiled. But the bathroom was a metal tube the size of a phone booth with toilet and hand-held shower two inches apart.

As we chugged through the Missouri plains, Randy was brave enough to pick up that nozzle, but I couldn’t. Having a toilet staring back at me while shampooing threw me for a loop. I figured I’d wait till California.

4. Amtrak workers are amazing – You think of the train as a gently rocking conveyance, and often it is. But there are many track switches and moments where you grab for anything steady. I gained a new respect for the always smiling, nimble-footed dining staff.

As we ate lunch — enjoying our first sight of Colorado mesas — I realized that although the food will never win a Michelin star, it was surprisingly good, considering it comes from… well, a train.

5. There’s no “One America” – By the red hills and majestic mountains of New Mexico, I saw there are many Americas – we’re a breathtakingly diverse mix of terrains, heritages, accents, and ethnicities.

In this one rail trip, we went from the skyscrapers of Chicago to the flat, endless plains of the Midwest to the mesas of Colorado to the redstone hills of New Mexico to the rugged deserts of Arizona, and finally to the palm trees of Los Angeles. No wonder we Americans have trouble seeing eye to eye. There are so many of us. And we’re so varied.

6. Randy can sleep anywhere (and yes, it annoys me) – What is it about men? On their first inhale lying down they’re asleep and snoring. I’m lying on the top berth, staring at the ceiling, listening to my husband, jealous.

And yes, at times, sleeping on a train is like being rocked in a giant cradle. But at others, it’s like being trapped in the tumble cycle of a washing machine, jarring and jolting. Meanwhile, my husband slumbered through the whole thing.

7. We’re still smart-ass kids – Randy and I met in college over 40 years ago. We loved to joke around, with constant banter on music, Bugs Bunny cartoons, and of course, people.

Last week, as we chugged through the Arizona desert, I saw how we’re still those smart-ass kids, sharing observations on some of our more “colourful” fellow passengers. (No doubt they were doing the same about us). I realized what brought us together back then was a shared, wry view of life. We still have that.

8. It goes by fast…two days later… it was over. — As the train pulled into L.A. with its dazzling blue skies, Randy and I looked at each other. We had finally made it across America. Despite myself, my eyes grew misty.

And I saw then this wasn’t just a journey of miles, but of years  – college, young married days, the birth of our sons, the death of beloved parents and friends, work, and now retirement.

Those two kids who wanted to jump in that van have made a good life together. And despite our older bodies and graying hair, I realized they’re still here. I gave my husband a hug. “We made it,” I said.

He gave me a hug back as the train eased to a stop.

Laurie Stone writes from the woods of Easton, CT. Her blog ”Musings, Rants & Scribbles” shares thoughts on growing up, growing older, and growing (hopefully) wiser. She draws inspiration from her poor, unsuspecting husband of several decades, two grown sons, family, and friends (including the furry ones).

So fun! You made me want to do the same thing!

Shari, I highly recommend it!