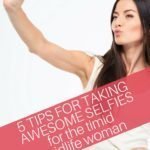 Have you ever seen an over-40 woman look at her phone and accidentally see herself in the front-facing camera?  Her response is likely one of panic as she frantically tries to turn it off.

And taking a selfie?

In an article on CNN, Kelly Wallace discussed a project titled SelfieCity which looked at selfie behavior.  The study suggested that, “While women, on average, take more selfies than men, the situation reverses itself after age 40.”

Women not so much.

Hmmm.  What’s up with that?

Have over-40 women somehow gotten the message that no one wants to see them?!

That they are invisible?

Where would they get that idea?

In our youth-obsessed culture, the models in fashion and beauty ads just keep getting younger.  It’s no wonder over-40 women lack the confidence to post selfies.

Message received:  Youth is beauty, wrinkles are not.

But if we quit taking selfies, aren’t we just contributing to the problem?

Aren’t we making ourselves invisible?

As an over-40 beauty blogger, I used to cringe every time my selfie posted next to a 20-something’s.  So I quit posting them.

Guess What. No one read my stuff.

I knew I needed to gain some selfie-awareness.

So, I went to the experts, teenage girls, and I asked for advice.

Here are the 5 tips that boosted my selfie-confidence.

The fashion, beauty and entertainment industries don’t use faces that look like ours, so let’s do it ourselves.  Take that over-40 selfie.

After all, when you want something done right, you have to do it your selfie.

This piece first appeared on CremesComeTrue.com.

Haha love it. I am a 50 something who hates hates hates my selfies. I will try these tips.