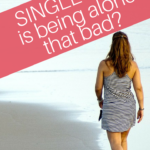 I have no regrets from my first marriage. It lasted 16 years and bore me 2 great kids. It wasn’t a bad break-up, we were young and drifted apart. I have a lot of great memories.

When it ended, I swore I would never do it again. I liked my freedom and discovering myself. It is a total shock to me that I did take the plunge a second time.

Yes, I am lucky to have found love twice. But what if I didn’t? Would I still be searching for someone to grow old with? Would I hate being alone? Would I sacrifice myself in exchange for a warm body to lay beside me at night?

I am told I don’t understand from my single friends because I have somebody. True but I like to think I wouldn’t settle either. I listen and watch as strong, independent women fall into relationships with total losers. Yes, selfish, inconsiderate, Peter Pan, card carrying, losers.

Why? I don’t get it. Because then you are not alone? So you can say you have someone? Really? Heaven forbid I actually say something.

I’m amazed that women over 50 can create the same drama a 21 year old can when starting a new relationship. You would think that older and wiser would make the approach different but it doesn’t.

You would think that their standards later in life would have raised the bar but I’ve seen it drop so far down that a five year old would have trouble to limbo under it.

And the absolute worst part is watching these single women overlook so many incompatible, annoying traits in their new loves only to be dropped like a hot potato when the “man” finds one flaw in the woman they don’t like.

There are good men out there. I promise there are but if you keep jumping on the first and easiest Dick that crosses your path, you may miss him.

Relax, it will happen. And if not, statistically speaking women outlive men so I will be alone in my old age too and we can shack up like the Golden Girls. I like to think I would be Blanche but chances are my sarcasm puts me closer to Dorothy.

Honey, you speak the ugly truth through the lens of hope. I love you.

Having that special someone to share your life with is so much better though, especially if both of you really are very compatible.

Single and growing old all alone would be the worst thing of all that can happen to many of us single guys, especially when so many other's are all settled down with their families. It does get very difficult when you get much older unfortunately, and there are many of us guys that would've loved to be married with a family had we met the right good woman.

I was lucky enough to find love twice too, and am so glad I did because I'm not a woman who would do well alone... having said that, I could never settle for the sake of settling either, I guess if I could do that I'd have stayed married to the first hubby.

Well good for you! You were probably afraid of being alone after your first break-up but you balanced that against settling and knew that you would be better off. Thank you for dropping by lovely!

Interesting reading these perspectives. Speaking as a single woman who has never married, no, it isn't so bad being on one's own. Being single and being alone are to very different things. It is very empowering to know you can be independent and thrive. I know I can buy a house on my own. I know I can travel solo and be a better person for it. This does not mean I wouldn't love to have someone to share these experiences with... just that I don't HAVE TO have someone. I am not opposed to marriage. Should the right fella show up on my doorstep tomorrow, I would definitely open the door. I love myself enough to do it for the right person but not to settle for less than someone I deserve. Some people are blessed enough to find that person early in life. For some people it takes a little longer. Everyone's path is different and that's okay!

I am so glad you feel that way Leah! I have many single friends, never married, and they are by far the most confident women I know. Maybe it is an age thing. I'm not sure.