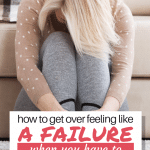 Failure is such a harsh word. We toss it around like we’re in a game of hot potato. Here, you take failure. No you take it. Fact of the matter is, there is no such thing as failure. Not in my books anyway. Unfortunately, not everyone agrees with me and so many still to this day feel like a failure and have trouble getting over that feeling.

Let’s lay this to rest once and for all and move on joyfully with our day and our life.

First of all, let’s take the word failure for what it really is.

It’s a lie.  There. I said it. It’s nothing but a bunch of baloney. It’s right up there with the word “luck”. I don’t believe people are lucky and I don’t subscribe to luck. Things, everything, happens for a reason. Luck has nothing to do with it.

Failure is a self sabotaging limiting belief word. The word failure cripples people. It’s like impending doom. Just when you think you might want to try something new, the word failure pops up in your head and you stop because you’re 100% sure nothing good will come of your idea or dream.

And just like that, that wonderful idea you had is gone. We safely place this idea high up on a shelf, every now and then we’ll take it down, look at it, admire it and then place it back up there. Tucked away. Heaven forbid we should actually do anything about it because, you know, that whole failure thing.

We place so much emphasis on the word failure. Can you imagine the possibilities if we held the word success in the same high regard? Think about that for a minute.

Our marriage just ended, our business just closed, our job became redundant, we just lost our house, whatever the case may be, here we are now in midlife and we reflect on what’s just happened and we instantly feel like a failure.

“How could this have happened? This is a disaster! I’m such a failure. What will the neighbours think?” (that last question is a doozy yes?).

Your whole life just feels like it’s turned upside down, for whatever reason or situation you are going through, and you instantly feel like a failure. Let me put that feeling to rest for you. You are most certainly not a failure. You never were and you never will be. Ever.

Whatever it was that didn’t work out for you, you gave it your all. That’s more than what most people do. The reason why I say most people is because I know you’re still hung up on the fact that people will talk behind your back and call you a failure. Forget them. You worked your ass off at whatever your thing was. It didn’t work, it’s over. Move on. Never mind other people. I quote my hero Les Brown here-

“Other people’s opinion of you does not have to become your reality”.

Sadly though, too many of us still hang on to opinions. Don’t do that. Let me put it to you another way, don’t worry about what people think of you, most of them don’t even think highly of themselves.

I want you to change your thoughts and mentality from

“I’m a failure and here I am midlife and what the hell am I supposed to do now? I’m too old to try anything new or start over again. This sucks and I hate my life”

“Ok well that didn’t work but at least I tried and gave it my all so now that that part of my life is over there is opportunity for me to try something else!! I also now have some great stories to tell others and maybe even inspire someone with my determination and will to move on with my head held high”.

Everything happens for a reason. You may not see the reason clearly right now but you will one day and you will smile. Big.

You are not a failure. Ever. You’re a fucking rockstar. Own that shit.

Iva Ursano is a freelance writer from Sudbury, Ontario who traded in her materialistic life in Canada for a third world country. She is a personal development blogger and helps motivate people to live the life of their dreams. You can email her here iva@ivaursano.com or visit her website Amazing Me Movement.