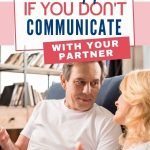 In a relationship, communication is everything. You are never going to get very far unless you are able to be clear about any problems you are having, and anything else you feel you need to discuss. Don’t keep things bottled inside, even if you think that it might hurt your partner to hear at the time. Remember that it is better to hurt someone with the truth temporarily than lie to them to make them feel better.

The truth is always going to come out, so it’s better to just get it out of the way in the beginning. In this article, we’re going to be looking at some of the things that are going to happen if you don’t effectively communicate with your partner. If you would like to find out more about this topic, keep reading down below.

If you aren’t effectively communicating, then understanding isn’t going to be easy. Sometimes other people’s emotions and feelings are difficult to understand at the best of times, and yet when they feel as though they can’t, or they won’t explain it to you, that is going to make it even worse.

We understand that sometimes talking about things isn’t easy and it’s not hard to get jumbled up and not know what you mean anymore. The trick here is to keep trying. No matter how long it takes you to express what you are trying to say, keep going until you get there. Remind your partner that you’re not perfect and that you are trying to help them understand but you’re struggling.

Just make sure that when the time comes and the roles are reversed, you are patient and kind with your partner as well. Do your best to understand how they are feeling, even if it doesn’t make sense to you. You do not have to understand what another person is feeling, but you do have to accept that they are feeling it.

2. Nobody Is Listening Anymore

A lot of the time, when it feels like a conversation is going nowhere, or there have been several in the past that have gone nowhere, it’s very easy to just shut down and stop listening. One of you will get to the point where you don’t see the point in listening and trying to communicate, and that is where it all falls apart.

Relationships are about effort more than anything else. You both need to be trying on some level, even if some days it is 80-20 rather than 50-50. We all have our off days, and you have to be willing to shoulder the extra effort on their tough days.

When things stop making sense, everything feels kind of pointless. We’re sure that you have felt like there was no point in your relationship at some point or another because they are not perfect. This is especially true when you two aren’t talking to each other properly.

You might be skirting around issues, pretending they aren’t there, or just burying the way either one of you are feeling, and it will come to a head.

Even though it feels pointless, you will likely have a big blow up argument where things are said that aren’t meant and so on. It’s not going to be good, and it’s not going to be an effective form of communication either. You need to try to make sure this doesn’t happen, by not bottling up how you are feeling from the other person.

The problem with no communication is that things often get lost in translation. Your arguments are going to become more petty. Things that aren’t an issue are suddenly going to seem like the biggest problem in the world. It’s not what you want from your life, but it might be exactly what you get.

For example, if you have a baby or you are expecting one, you might be looking at a bassinet buyer’s guide, only for your partner to come and decide they don’t agree with what’s written in it. This may cause a huge argument, when there is no need for it.

It’s things like this that are really going to stick out, but it’s easy to avoid. You do not need to have these petty arguments. Talk about things. Talk through them when you disagree.

Finally, the last thing that will happen is you will simply fall out of love. If you are not being heard, if you are not being listened to, it might feel as though you don’t know who your partner is anymore. When this happens, there is no hope for the relationship.

For as long as you are both trying to communicate there is still something there, but when you fall out of love, there’s nothing to save anymore and the inability to communicate will have been the nail in the coffin. It’s not the nicest of things to happen, but if you don’t start to make the changes now, then it’s inevitable.

We hope that you have found this article helpful, and now see some of the things that happen if you don’t effectively communicate with your partner. You might think that it isn’t a big deal right now, and it might not be, but the longer it goes on the worse it is going to get.

If you want to save the relationship that you are in right now, it’s important that you learn to communicate better, and that goes for both of you. We wish you the best of luck.