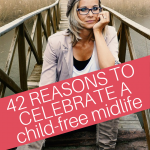 There’s a magnet on my fridge that reads: “Just because you can have children doesn’t mean you should.”

I took its message to heart years ago.

The fact is, I never heard the siren call of motherhood. If I ever had maternal instincts, I burned through them early when forced into the role of surrogate parent to my 11-years-younger sister because our divorced mom abdicated a lot of the caretaking to me.

As the “responsible one,” I also became a mother to my own mother—a role that didn’t end until mom died when I was in my late fifties. It soured me on mothering. Intellectually, I understood that having a child is different—their dependence on you is legitimate—but I still didn’t want one.

When I was in my thirties, a male business client opined that childbearing was a woman’s duty. I don’t recall the context in which he made his remark, but to this day I remember how I bristled when he said it. Believing discretion the better part of valor in a business setting, however, I bit my tongue. If someone said that to me today, though, I’d respond:

Um, no. Motherhood is a choice. I chose to be child-free and I have no regrets. I respect women who choose differently, because parenting—good parenting—is one of the hardest jobs there is. It’s also not for me, and here are some reasons why I’m glad I never had kids:

42 Reasons To Celebrate A Child-Free Midlife

Some of you may think my reasons for being glad I didn’t have kids sound superficial, self-indulgent and/or selfish. I’m simply speaking my truth (with a little bit of what I hope is humor thrown in). And let’s face it—if these reasons reflect my priorities, then it’s probably a good thing I didn’t become a mother, right?

Look, I know being a parent isn’t easy. It’s a commitment like no other. You are responsible for clothing and feeding and shaping the values and helping with homework and changing diapers and making doctor appointments and chauffeuring and loving and forgiving and worrying about and modelling good behaviour and simply being present for another human being for the rest of his or her life. Sometimes you have to make unspeakably difficult decisions. And sometimes you have to let go.

I let go of societal (and some familial) expectations that I should reproduce a long time ago. And I’ve let go of others’ judgment of my reasons for not becoming a mom because I know in my heart it was the right decision for me.

What do you think? If you’re a mom, has motherhood been all you hoped it would be—or has it been more or less in any way? If you didn’t have kids, do you have any regrets? While you’re thinking about it, here’s this week’s haiku:

Life teaches us that
motherhood, like old age, is
no place for sissies.

You can find Roxanne Jones on Boomer Haiku. If you have any questions or want to read more clever musings, please visit her blog.

This was a good post. I'm happily childfree as well. I had a good childhood, but I've never had any urge to raise children whatsoever. I like to joke that I was born without a maternal instinct.

I have a girlfriend who had to raise her siblings when she was in high school because her mom was too busy working and doing other things. She not only left home and moved out before she turned 18 but never had kids and never regretted it. She said the same thing you did that she already raised a family.

Your girlfriend and I are on the same page, Jennifer! Thanks for sharing this.

I don't have any kids and my boyfriend plans on getting a vasectomy. I would've gotten my tubes tied by now, but the process is much more difficult for a woman versus a man, so we are saving up to get the surgery done for my boyfriend instead. We're dedicating our lives to saving as many animals as we can, therefore children can't be in the picture. (They could, but we also just simply don't want children). Love this post!

I'm also sick of hearing, "You'll want them one day!" or "It's different when they're your own". Is it so bad to not want children?

Thanks for your comment, Alexis. It sounds like you're extending your maternal instincts in another direction, and I applaud your wanting to rescue animals. It's NOT so bad to not want children. No other reason needed besides, "I don't want to be a mother."