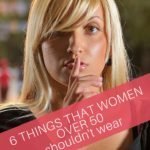 Google “what not to wear after age 50” and you will have your pick of thousands of articles telling you what looks terrible on your old body.

I want to point out to the writer who wrote the ‘no-no’ article, you need to remember you are writing for women over age 50, not preschoolers. I don’t think I’ve said ‘no-no’ since my youngest was a toddler.

We could spend hours studying the clothes we shouldn’t wear and the slang we shouldn’t use and the makeup techniques we need to retire.

Here’s me, weighing in on this topic.

You are over 50 for Pete’s sake. Wear whatever you want. If you’ve made it to 50 and still need to consult articles on how to dress appropriately then you are so missing out on one of the best things about being over 50.

One of the best things about getting older is realizing that we don’t have to spend our energy worrying what other people think and we get to be comfortable in our own skin with our own freak flags.

Still, there are a few things that women over 50 really shouldn’t wear:

There isn’t anything wrong with getting advice about updating your look or what to wear, but we are just inundated with that stuff, aren’t we?

Who says what is appropriate? From where I sit, it seems ‘appropriate’ changes based on geography, social status, income and size. After a while, the advice becomes a confusing blur. I think I’ll just keep wearing my Keds and jeans and black tee shirts.

Oh, I do have one real tip. Stop wearing holiday theme clothes. Seriously.

This piece was written by Michelle Poston Combs and you can find more articles by her here.

I wear what looks good on me. I love the younger styles and wear them if they don’t make me look ridiculous.

Great article, but what doesn't sit right is this author is about making "mid life matter" but uses "young bait" in her lead shot. Um... no. Great shot, beautiful woman, but she's midlife like I'm Yoda. lol

I hear ya! This is a super old article and believe it or not, but it used to be really hard to find stock photos of midlife women. They would all be photos of my grandmother. I should update this and find a more appropriate image. Thanks for the reminder!

I’m coming with you

Great Article, I could not agree more. I reserved my right to vacate Mars and move to Jupiter were woman are free of being everyone's caretaker. Nothing turns me off more than enabling and/or living in the past.